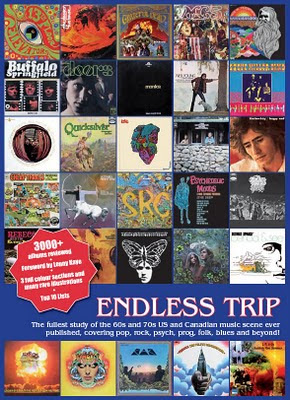 The five-star review below appears in the current issue of Record Collector, and calls  Endless Trip 'knowledgeable', 'perceptive' and 'thought-provoking', concluding that it's 'a splendid tome' and 'a one-way ticket to essentialdom'. Much obliged! 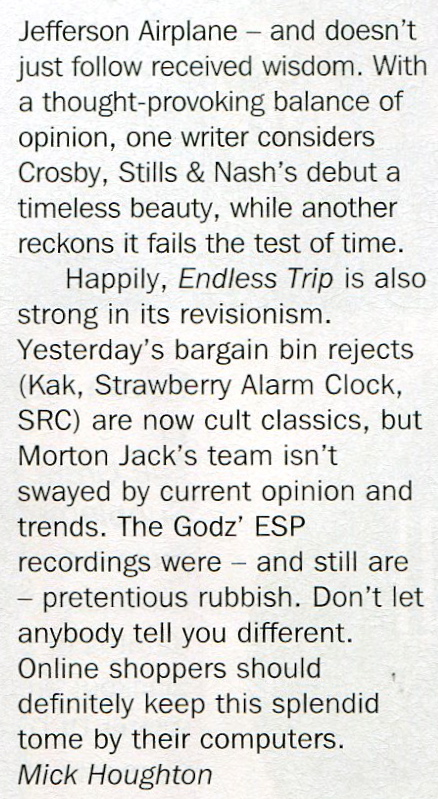 Pink Floyd: vipers at the gates of dawn

Pink Floyd were making waves in the UK underground as of late 1966, and by the spring of 1967 the mainstream pop press was taking note too. I thought I'd throw a few early items up from one of the best music papers of the period, Disc & Music Echo.

'Arnold Layne' was released on March 11th, and reviewed by Penny Valentine the same day (lucky girl, she must have had one of the promo copies in a picture sleeve): 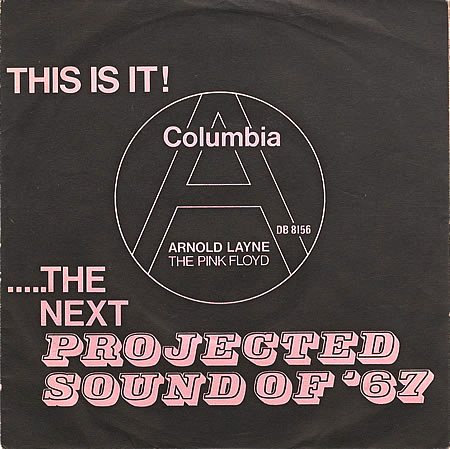 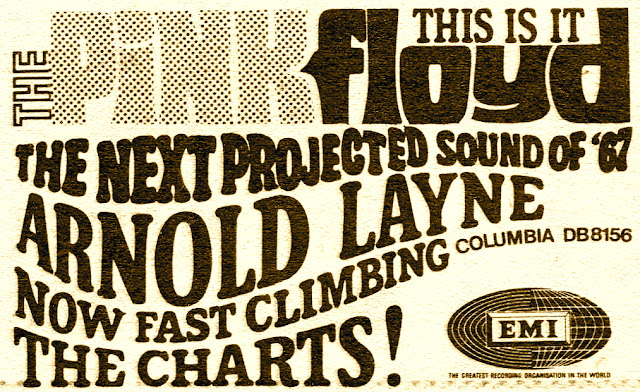 On March 25th the paper ran this wittily-headlined piece, which is perhaps where most of their future fans first learnt names such as 'Mick Mason' and 'Syd Barratt'. It also makes an intriguing reference to their plans for 'a possible television series':

The same issue contained this letter,  penned by an aggrieved pop fan who clearly didn't like the winds of change that were blowing through the hit parade:

The missive provoked this furious reply: 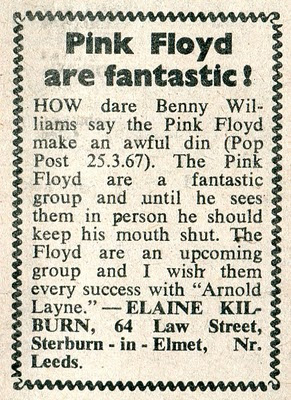 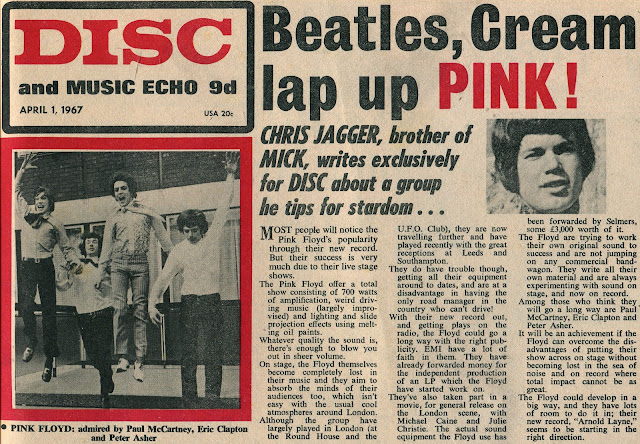 The April 8th issue contained two interesting items. The first of them announced an important showcase gig for the quartet, as well as the television show referred to on March 25th. I have yet to encounter a subsequent reference to the latter. 'Percy The Ratcatcher' was the working title of 'Lucifer Sam', incidentally: 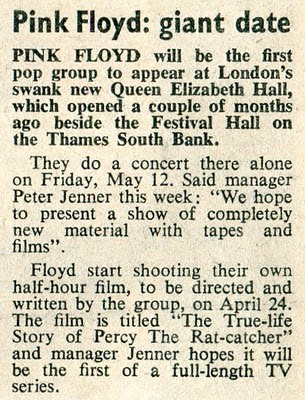 The wittily-headlined article below appeared a few pages later (and confuses Syd Barrett and Rick Wright, whilst also acclaiming Syd as 'the best-looking of a rather ordinary bunch'. So who really is the better looking?): 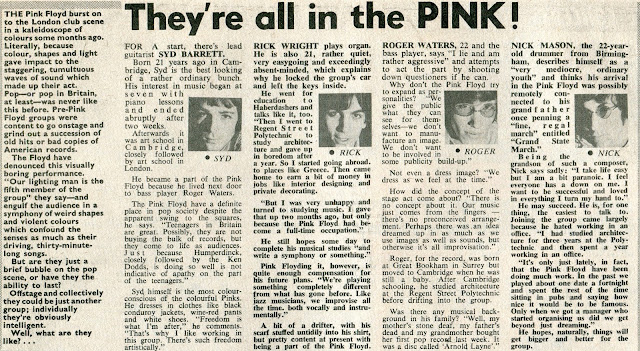 By this time, the band was not only appearing in features, but also in small ads: 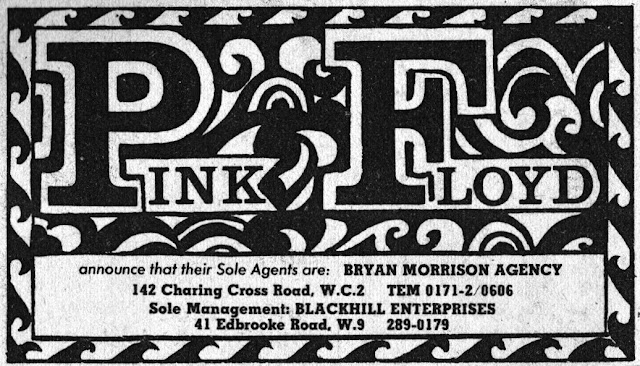 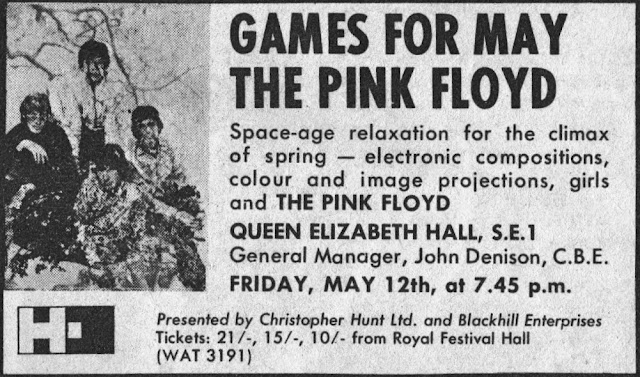 'See Emily Play' was released on June 16th, and duly reviewed by Penny Valentine on the 17th (presumably she received a promo p/s for this one too, damn her): 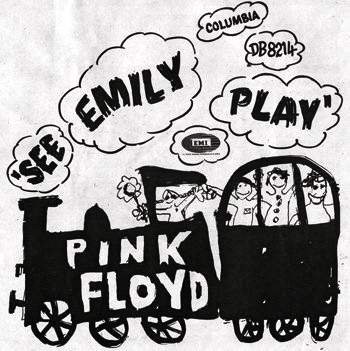 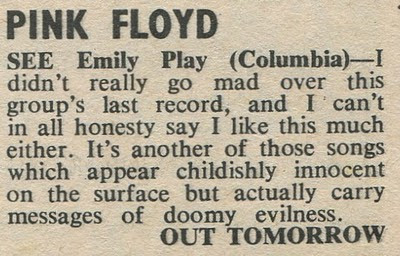 Her lukewarm response mattered not a whit: by July they were bona fide hitmakers, and anticipation was running high for their first LP, whose title Bob Farmer excitedly announced on July 8th: Viper At The Gates Of Dawn. 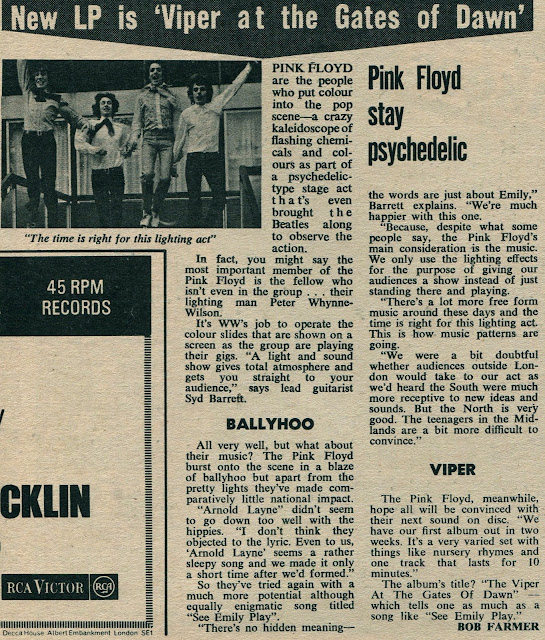 On July 15th their tour dates were announced, as well as forthcoming appearances on a kids' TV show: 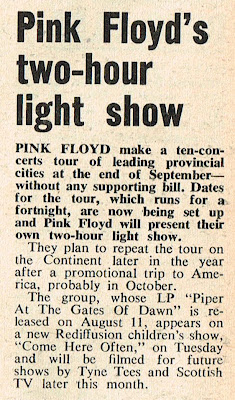 On July 22nd came another overview of the band (which also confuses Syd Barrett and Rick Wright, and tells us that Syd 'doesn't care about money and isn't worried about the future'): 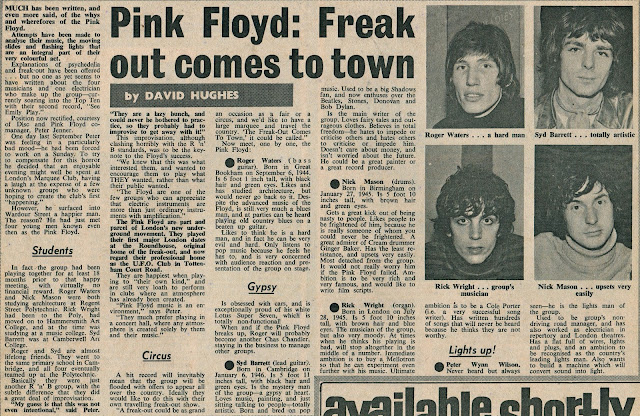 On the same page appeared this advert: 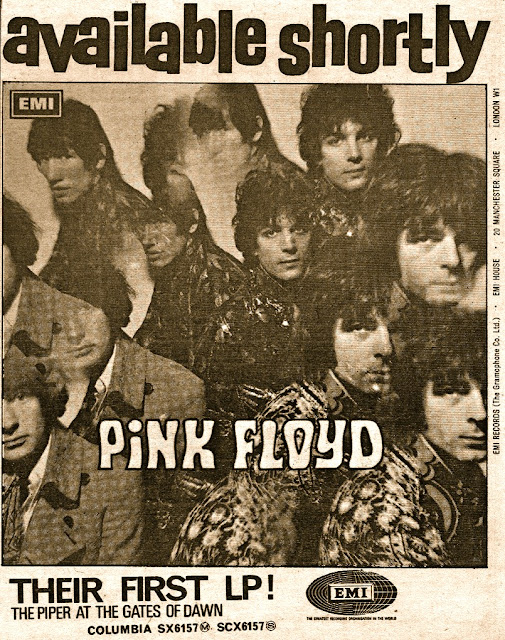 On July 20th the boys ventured to Scotland for a few days, whence Bob Farmer filed this wittily-headlined report from the glamorous Stotfield Hotel in Lossiemouth, published on July 29th: 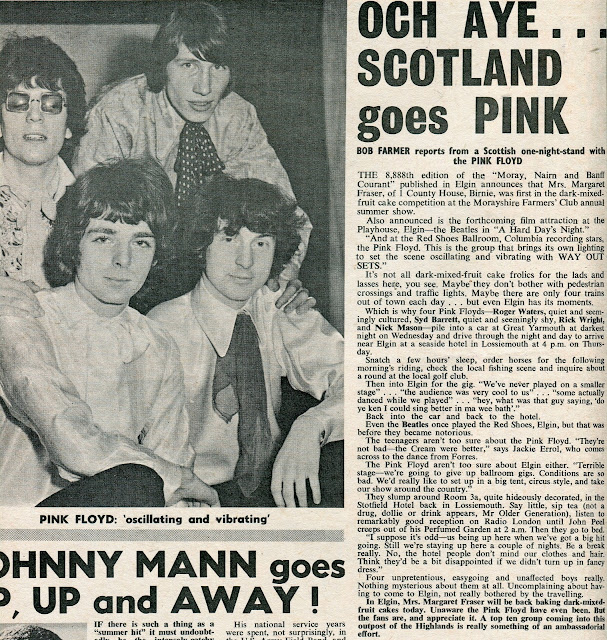 The album was released on July 28th (despite what you might read elsewhere else). The issue of Disc dated August 5th didn't mention the LP, instead focusing on a possible circus-style tour that, according to co-manager Peter Jenner, 'could be the biggest thing to happen in pop':

At last, the album was reviewed on September 2nd by Bob Farmer (in an issue whose cover was entirely given over to a Brian Epstein tribute):

My friend Richie Unterberger's new book has just been published. Entitled Won't Get Fooled Again: The Who From Lifehouse To Quadrophenia, it's a 300-page exploration of The Who's grandiose but abortive Lifehouse project, conceived as the follow-up to Tommy. 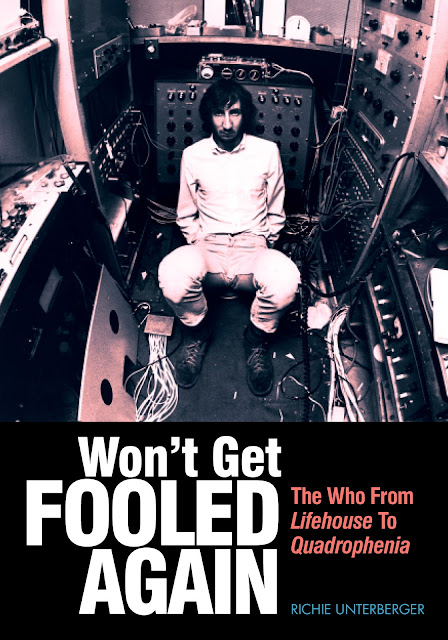 Though Lifehouse didn't come off, much of it surfaced as their August 1971 Who's Next LP, and several of its ideas were carried through to 1973's Quadrophenia. As is customary with Richie's work, the book is the product of exhaustive research and interviews, and likely to be the final word on the subject. You can read more about it at
http://www.richieunterberger.com/Who70s.html
On the subject of Pete Townshend, I've unearthed what I think might be his earliest ever interview about the idea of a rock opera - or, as he says he prefers it, 'mini-opera'. It's taken from Beat Instrumental of March 1967, and seems to be an in-depth discussion of 'Rael', which appeared in a much different form on The Who Sell Out in December of that year. 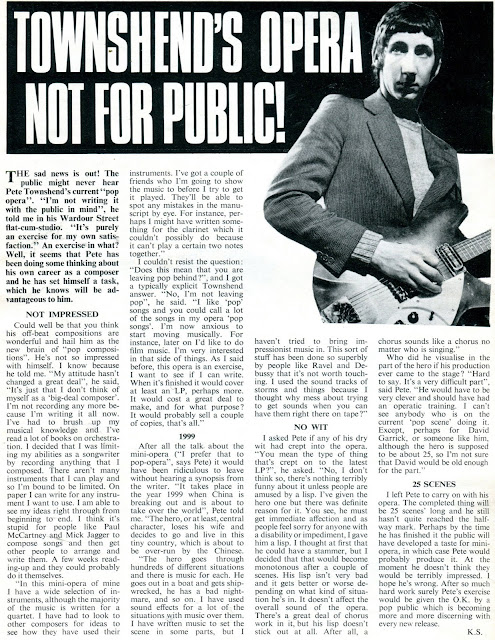 Its plot, incidentally, seems just as baffling as that of Tommy (a Chinese guy with a lisp is widowed, so moves to a smaller country that's about to be invaded by China, where he has nightmares and is involved in a shipwreck) - but clearly the idea of a central character with some form of disability was already in place. As Townshend earnestly explains: "He must get immediate affection, and as people feel sorry for anyone with a disability or impediment, I gave him a lisp. I thought at first that he could have a stammer, but decided that would become monotonous after a couple of scenes."
Posted by Richard at 01:55 No comments:

Email ThisBlogThis!Share to TwitterShare to FacebookShare to Pinterest
Labels: Pete Townshend, Who

Spirogyra: fairly loud without being ear-splitting 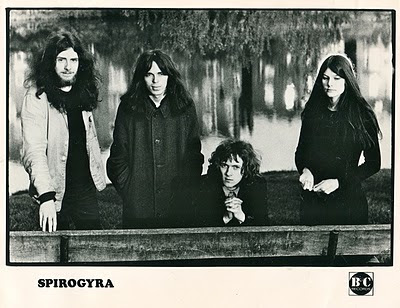 Spirogyra tend to be termed 'acid folk', but a better description of them would be an idiosyncratic acoustic rock group. Initially a quartet led by Martin Cockerham (an intermittently great songwriter but a lousy singer), assisted by Barbara Gaskin (not a songwriter at all, but a terrific singer), they formed at the University Of Kent in Canterbury at the tail-end of 1969, and lasted until the middle of 1974, by which time they'd issued three albums and two singles.


The first reference to them I've seen was in Melody Maker of February 20th 1971, explaining that they had been allowed a year off from their studies in order to focus on their musical ambitions:

Here's a flier for an early performance: 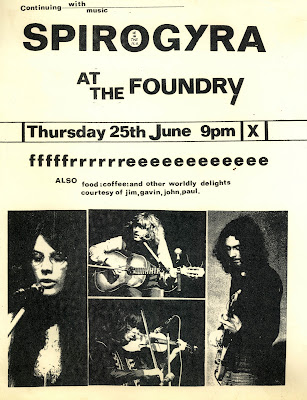 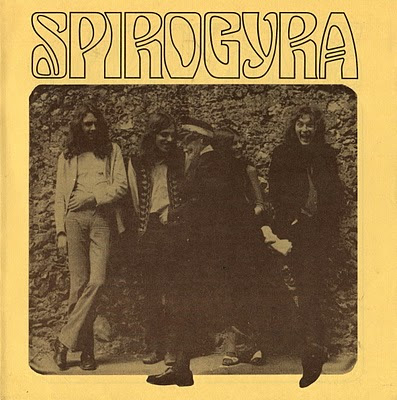 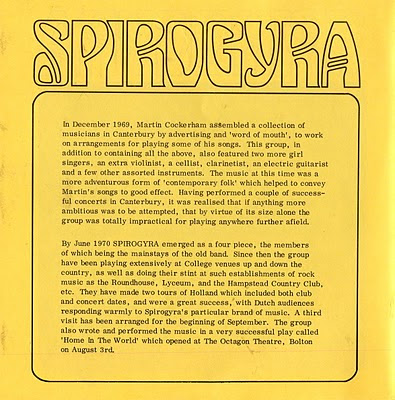 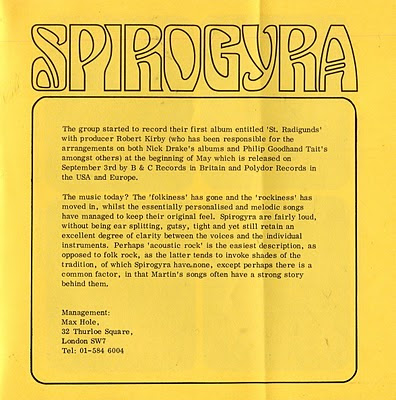 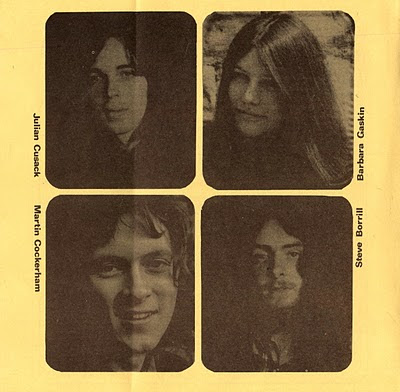 The album got pretty solid reviews. ‘The words of Martin Cockerham’s songs (and one from Julian Cusack) show that within the confusion of the younger generation there can be a lot of insight into the real world', commented the NME. 'There are allegorical lines that, even without scholarly analysis, grip you with an instinctive meaning. As for the music, it slips into an occasional cliché, but on the whole it implies by the form chosen (aggressive treatments against insistent beats, with a lot of deliberate dissonance) the same rejection of trendy ideas’. Record Mirror suggested that ‘There’s a bit of Pentangle here, a bit of Curved Air, a little of the Incredibles and a few shaky harmonies among this avant-garde, medieval-ish approach to electric folk. The occasional quiet guitar melody is nice, but it’s yet immature vocally and will improve with time’, while Beat Instrumental felt ‘It is Julian Cusack’s violin that gives Spirogyra its distinctive sound. At times the effect goes into an almost electronic scream… Their sound is possibly an acquired taste, but could catch on in the way that Curved Air’s has’. Melody Maker were in favour too, stating that ‘The musical approach Spirogyra make is imaginative enough to leave a lasting impression… Barbara Gaskin’s silken vocals are not enough to hide the roughness contained in Martin Cockerham’s lyrics, though.’
The following interview with Cockerham and Gaskin appeared in Disc & Music Echo on September 18th: 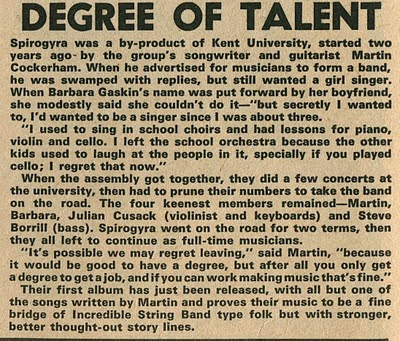 The band had soon embarked on a nationwide college tour to support the LP; here's an advert for it: 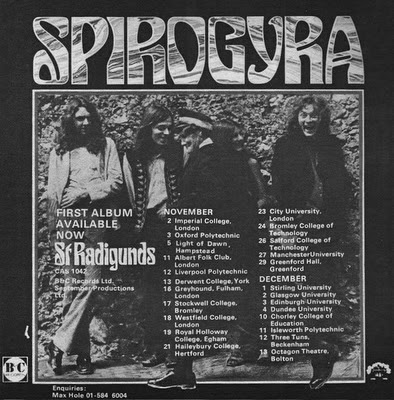 And here are a couple of pieces from the music weeklies:

The article below appeared in Beat Instrumental of November 1971: 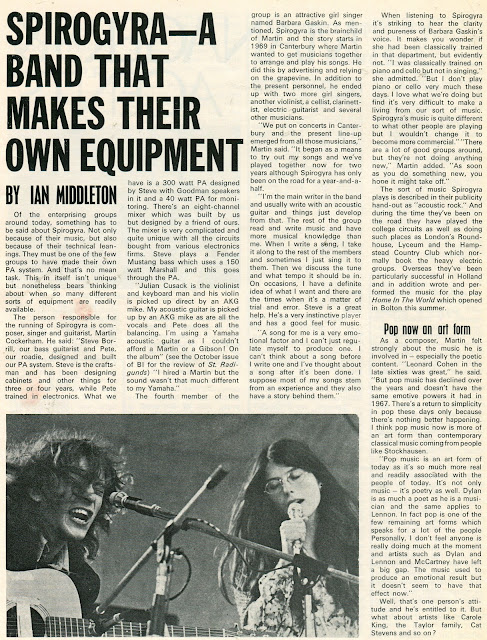 Following the album's release, violinist Cusack departed to focus on his studies, and was replaced by guitarist / keyboardist Mark Francis (Cockerham's original partner under the Spirogyra name). Their second album, Old Boot Wine, appeared on Pegasus in June 1972, and contains some lovely ballads as well as the acoustic rock classic Dangerous Dave. Following its release the band condensed to the duo of Cockerham and Gaskin. Having relocated to a damp flat in Battersea, they concocted the third and final Spirogyra release, Bells, Boots & Shambles, released in March 1973 and now regarded as something of a classic.
I spoke to Martin Cockerham a few years back - here's what he told me:


How did the band get its name?
Mark Francis and I originally intended to call ourselves Amoeba, but then I thought that as that was a single-celled organism we should be Spirogyra, because that’s when two  join together.
How did you meet the other members?
We were all musicians in the same place, basically. Julian was a brilliant violinist and mathematician, very gifted. I had no musical training so he worked out all the strange chords I was writing. Barbara and Steve were also students and we all started living together in St. Radigund’s Street, next to Canterbury Cathedral. It was a fantastic environment and other musicians would sometimes drop in – Soft Machine, Caravan, Ian Dury, Steve Hillage and others.
How did you get signed?
Max Hole, the Student Union entertainment secretary, offered to manage us and got us a deal on B&C through Sandy Roberton. We were doing a BBC session before the first album, and met Robert Kirby there. We all liked his work arranging Nick Drake and others, and asked him to produce St. Radigund’s. It was perhaps a mistake as he didn’t know us well enough or have a clear enough idea of what he wanted from us. Max produced the next two with help from the rest of us.
What do you remember of making the albums?
The songs had a habit of evolving in the studio. For example, Dangerous Dave on Old Boot Wine was folky when I wrote it, but as soon as Dave Mattacks started playing around with it the rhythm totally changed and it became this driving rock song. Our rhythm tracks were always recorded pretty much live in the studio. Only the strings and vocals were added later. On Bells, Boots & Shambles I knew exactly what I wanted, and there was a great atmosphere.
What was the background to it?
Julian and Steve left after Old Boot Wine as things were moving too slowly. I moved to Battersea, though Barbara kept a room in the house in Canterbury. We’d got together romantically by then, and the album was made in that situation. By the time we made it I’d learnt a lot and was more in control of the band. The others came back to play on the record, but only as guests. I loved the arrangements and think it’s the best album we made. I’ve even read people saying it’s the best album ever recorded!
How were you received at the time?
The albums barely sold – we were a tax-loss, so the record company felt no incentive to push us. As a result there was no promotion at all. We were never played on the radio, even by John Peel, so had to tour endlessly. That did mean we were on the same bill as huge names like Traffic, The Who, Rod Stewart & The Faces etc, but it was the best we could do, which was frustrating at times. All the albums have sold better on CD in recent years than they ever did then.
What have you done since?
After Spirogyra I travelled around Ireland by horse and cart, then went on to India, Thailand, Bali and Hawaii, spending a long time living in each place. Now I’m back in England, writing, recording and gigging again.
Posted by Richard at 03:04 1 comment: