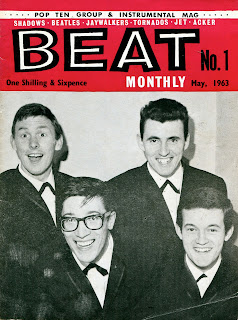 I find the short window between The Beatles’ regional and national success very interesting, and thought I'd post here the numerous references to them in the first issue of Beat Monthly (later Beat Instrumental), dated May 1963. The magazine catches them at the odd point between mega-stardom and a gig sheet that included The Riverside Dancing Club, Tenbury Wells and The Merseyview Pleasure Grounds, Frodsham. The 60s were well underway, but not yet swinging. Artists like Karl Denver, Acker Bilk and The Bachelors were still forces to be reckoned with, and reading the mag one can palpably sense the musty theatres, motorway service stations and cheap hotels that still defined the Fab Four's world.
Firstly, here's the feature about them in the magazine. Mostly it's bland press-release fare, but there's an interesting pledge from Ringo that they have no intention of leaving Liverpool, and it's of note that he's the spokesman here, having only joined the band in August 1962: 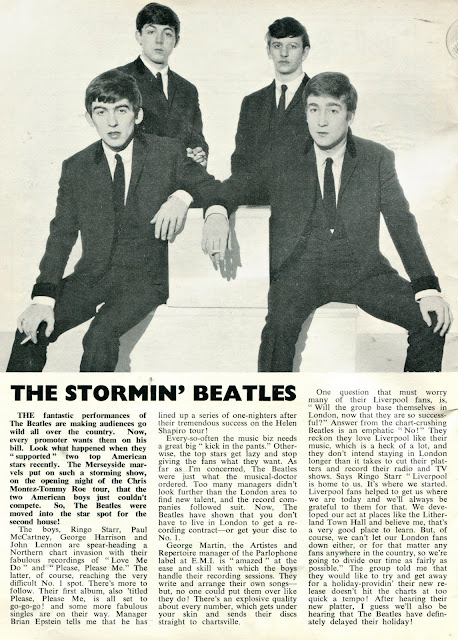 Given that the magazine had apparently promised to feature them every month, The Beatles unsurprisingly wished it every success:

The pop news (covering March and early April) intersperses titbits about Tony Meehan's shoes, Bert Weedon's tunings and Acker Bilk's real name (Bernard) with reports that The Beatles plan to form a publishing company with Brian Epstein (misnamed Billy here), that George Martin is impressed by their innovative approach in the studio, that there's talk of erecting a statue of Epstein in Liverpool, and that the band is 'fantastically popular' in Germany: 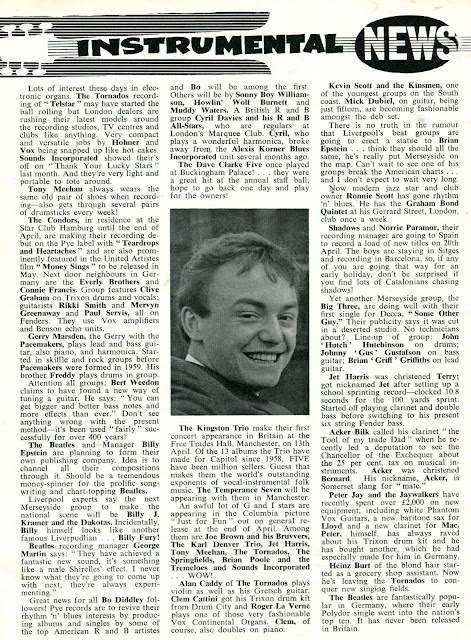 The 'New Discs' page and chart neatly illustrate the tension between the old and the new, with records by The Beatles vying with outmoded efforts from Bert Weedon, The Ventures, The Spotnicks, Karl Denver, The Bachelors and others. At this time The Beatles still had one foot firmly in the old-school showbiz camp, and (As David Gell's review points out) Please Please Me - released on March 22nd, barely a month after its sessions had ended - contained such square numbers as Chains, Boys and A Taste Of Honey (which presumably went down a treat on the local ballroom circuit): 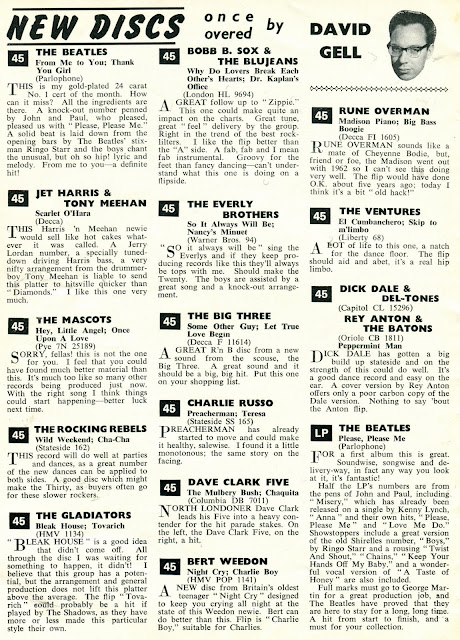 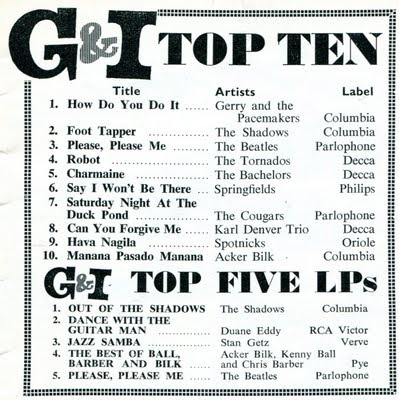 The letters page contains an encomium from their fan-club secretary, Bettina Rose, who had apparently been told by them that Beat Monthly was 'this fab new magazine', while to its right is a 'Popularity Poll' (you can guess who went on to win it). The competition prize was to spend 'A DAY WITH THE FABULOUS BEATLES':

(I have looked in subsequent issues, and there was, sadly, no follow-up feature.) Towards the back of the magazine came the gig listings, covering mid-April to mid-May, well before Beatlemania struck: 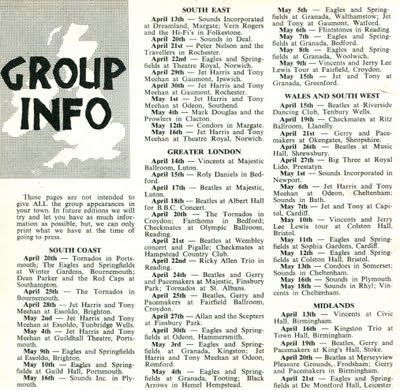 And, finally, the back cover finds the quartet posing moodily in and around a phone booth; before long they would be out of their shabby jackets and ties and in Epstein's regulation Beatle suits. 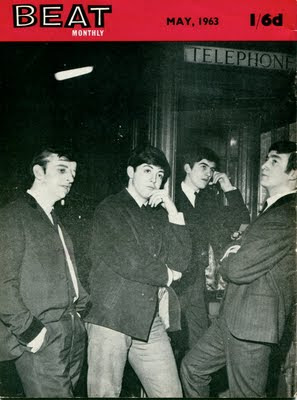 Please Please Me hit #1 in May, after which things would never be the same for them (or pop) again. It's worth noting that the quartet were as surprised by their huge success as anyone – as George commented in Derek Taylor's brilliant Fifty Years Adrift: "From our point of view, The Brook Brothers and Peter Jay were The Big Time. To us, they were the established stars doing the big theatre circuits, with their managers and London agents and the television bookings and all that, while we were the jokers in the pack, really - the Fab Scruffs who came in from nowhere."
Posted by Richard at 06:56 2 comments: