THE BEATLES, THE STONES & MARY SCRUGGS

As any Beatles nut will tell you, the crowded cover of Sgt. Pepper's, photographed by Michael Cooper, includes a nod to the Stones in the form of a Shirley Temple doll wearing a knitted sweater with the words 'WELCOME THE ROLLING STONES' stitched onto it. According to Wikipedia here, this item of clothing 'was provided by Cooper's young son Adam'. In fact, it seems to have been given to the Beatles by Mick Jagger himself, an earth-shattering discovery I made as I flicked through the packed August 1966 issue of Hit Parader (actually out in June).

As you can imagine, the Stones - like all touring bands in the mid-60s - were besieged by competition winners wherever they went. Two such were Mary Scruggs and Sally Ware from Memphis, Tennessee, who got to go backstage before the band's performance at the Mid-South Coliseum on November 17th 1965. Hit Parader - writing about the event some months after the show - made it clear that the Stones were not popular with the venue:

Nonetheless, the girls managed to meet the band after winning different sections in an art contest organised by a local radio station, WMPS (the sweatshirt does not say 'WMCA', despite what practically every source says). Sally's effort was a terrible charcoal portrait of Mick: 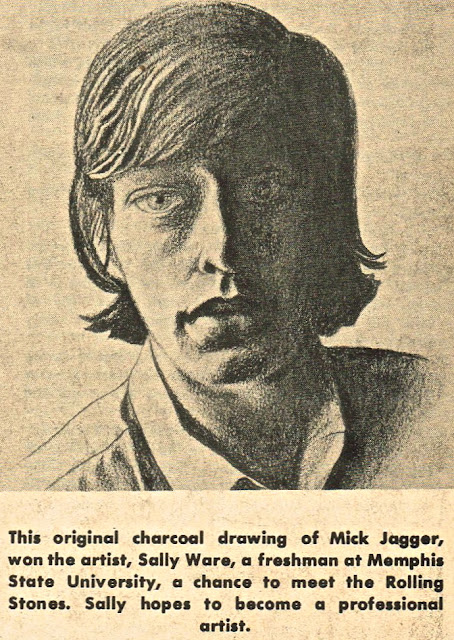 Mary, meanwhile, went down the knitwear route. According to the article, she was '17, a Senior at Immaculate Conception High School and an officer in a local Rolling Stones Fan Club': 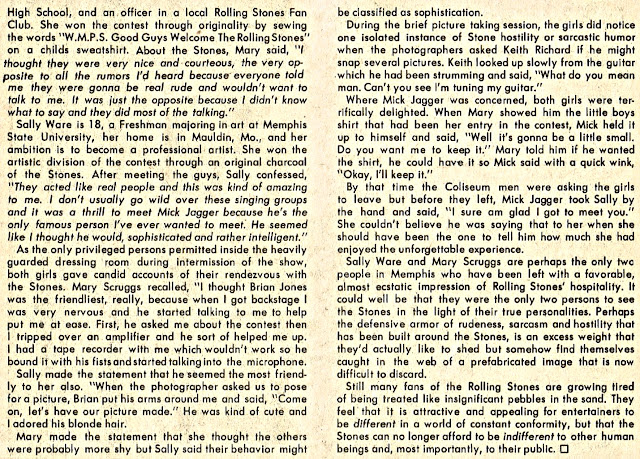 As the extract above makes clear, Mary gave the sweater to Mick at his request. Far from dumping it as soon as she departed (the likely fate for Sally's drawing), he seems to have taken care to bring it back to the UK, ensuring its place in history when it was photographed in glorious technicolor on March 30th 1967.

At the close of the year, the Stones repaid the Beatles' tribute by hiding their faces in the lenticular image on the cover of Their Satanic Majesties Request. You can read all about that here. As for Mary - well, she seems to have gone on to become an elementary school art teacher, under the name Mary Anne May. You can read a little more about her here.
Posted by Richard at 10:13 4 comments: