Attempting to marry the sophistication of Playboy and Esquire to the countercultural appeal of the underground press, Cheetah only managed eight issues (October 1967 to May 1968). It was mocked by the cognoscenti at the time for striving too hard to be hip (worst of all 60s crimes!), but it stands up well. This largely owes to its music articles, such as Jules Siegel’s fabled ‘Goodbye Surfing, Hello God’ interview with Brian Wilson (October 1967) and an interview with Curt Boettcher about the occult (April 1968). In addition, its record reviews by Peter Winkler (including what seems to be the only contemporary assessment of Safe As Milk, which he loved) are among the most perceptive of the period.

The January 1968 issue included a triple portrait by Tom Nolan of the so-called 'Orange County Three' - Jackson Browne, Tim Buckley and Steve Noonan - who were considered to have equal promise at the vanguard of the emerging confessional singer-songwriter movement. Today, of course, they are respectively a star, a cult hero and a footnote. The article is often referred to, but hasn't been available online before, so here goes. 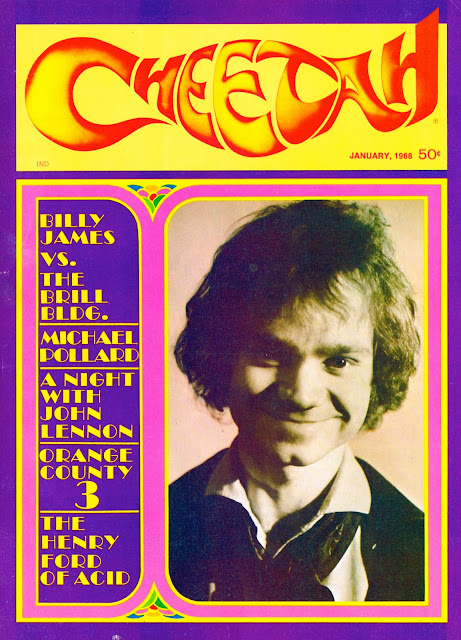 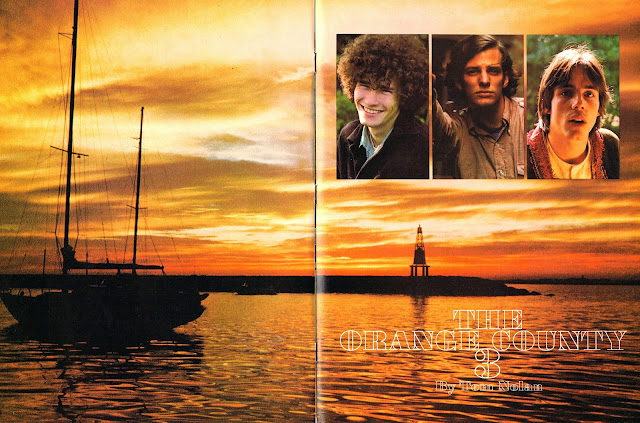 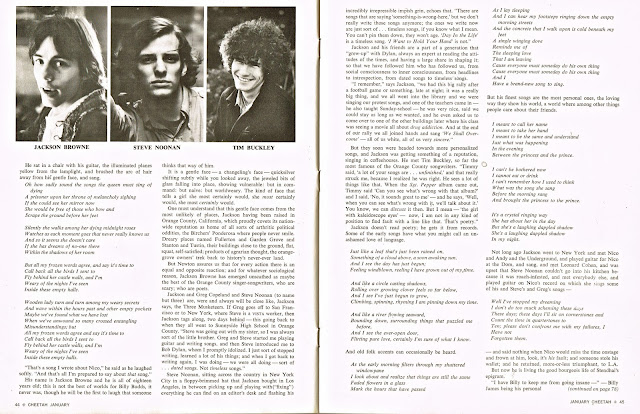 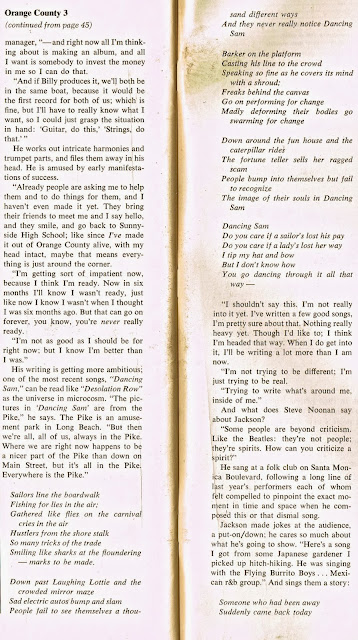 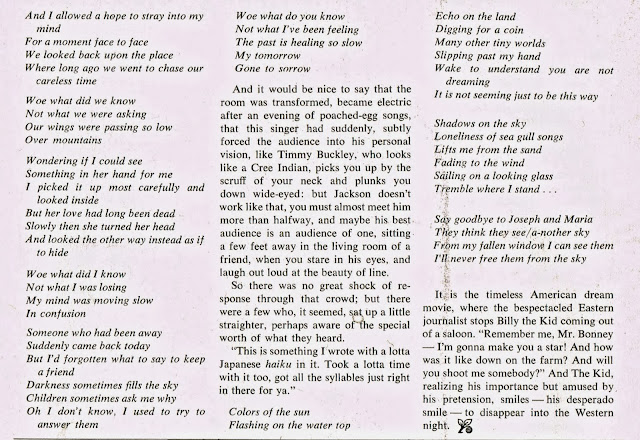 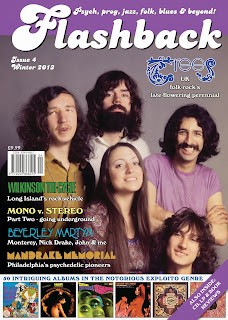 I'm delighted to announce that Flashback #4 will be available as of December 11th, and can be bought here.   TREES are on the cover, and the accompanying feature includes full interviews with all the members, as well as several other figures close to the band. Also included are scoops on cult psych bands Mandrake Memorial, July, Fraction and Wilkinson Tri-Cycle, a powerful memoir by Beverley Martyn of her interrupted musical career and troubled marriage, a jukebox from witch-rockers Blood Ceremony, a personal tour through Peter Eden's many classic productions, part two of Patrick Lundborg's investigation into mono v. stereo mixes, a guide to 'proto-punk' records, 50 intriguing LPs in the notorious Exploito genre, a history of the rare Go newspaper, and in-depth music / book reviews, with rare / unseen images and vintage music paper reprints throughout. Enjoy!
Posted by Richard at 02:08 1 comment:

DUNCAN BROWNE Portrait Of The Artist As A Young Man

Few hard facts are available about this interesting singer-songwriter, whose debut album, August 1968's Give Me Take You, is one of the rarest of the period. This gratifyingly detailed interview appeared in the first issue of the surpassingly obscure and short-lived British pop journal Strange Days in September 1970, and is reproduced here for the first time. Enjoy! 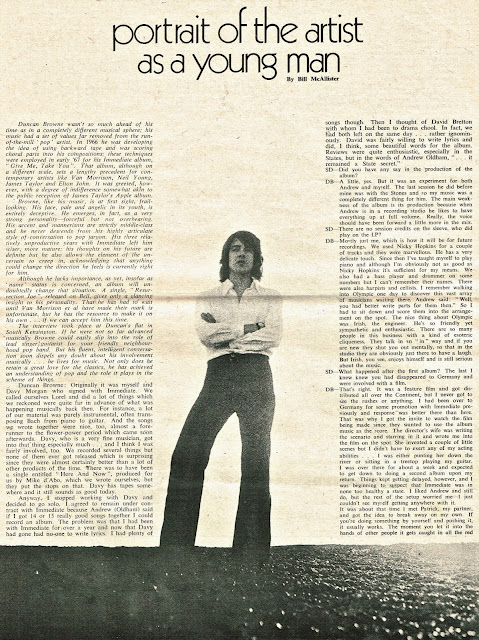 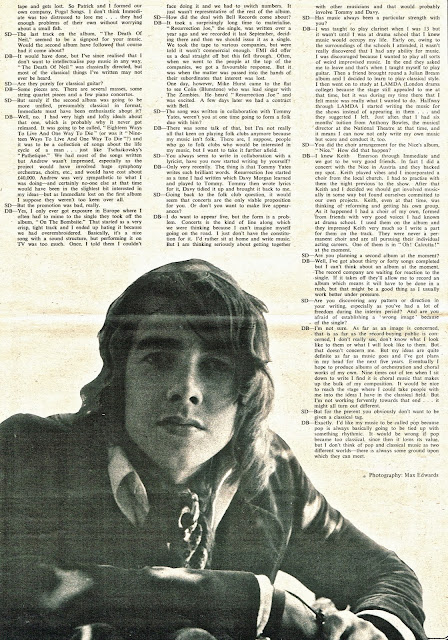 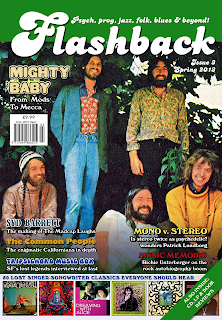 I'm delighted to announce that Flashback #3 will be available as of May 21st, and can be bought here.

Mighty Baby are on the cover, and the accompanying feature includes full interviews with all the members, as well as several other figures close to the band. Also included are a jukebox from Ripley Johnson of Wooden Shjips, a study by Richie Unterberger of the rock memoir industry, Patrick Lundborg on the mono v. stereo question, producer / Harvest boss Malcolm Jones on Syd Barrett and the making of The Madcap Laughs, 50 Overlooked Singer-Songwriter LPs, a history of the rare Top Pops newspaper, and in-depth features on the Common People, Tripsichord Music Box and more, as well as music / book reviews and plenty of rare / unseen images and vintage music paper reprints. Enjoy!
Posted by Richard at 03:00 No comments:

Thanks to Andy Morten for this warm review in the new issue of Shindig. 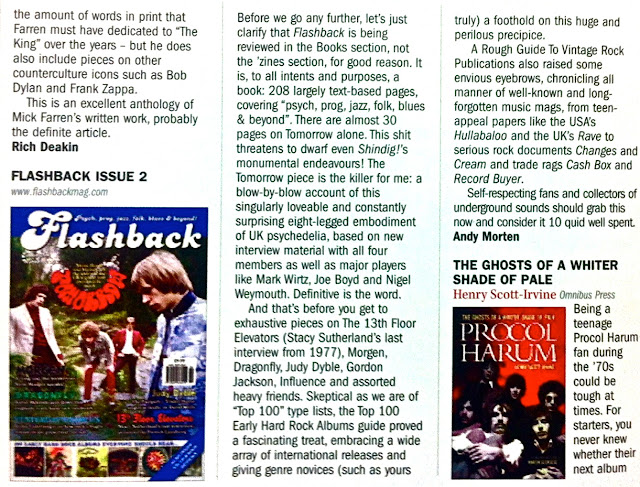 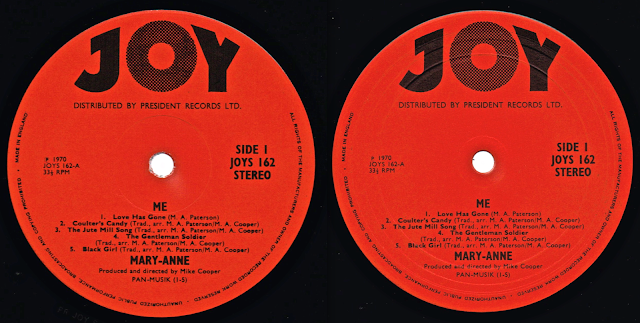 Pressing 1 has a subtly different mix, and includes completely different versions of two songs, The Gentleman Soldier and Candyman. Ironically, these are the only weak tracks on the album, their jaunty tone jarring with the prevailing air of restrained melancholy. The former runs 2:39 on Pressing 1 and 3:15 on Pressing 2, while the latter runs 1:45 on Pressing 1 and 3:08 on Pressing 2. In both cases, I consider the Pressing 1 takes to be superior. Not only are they shorter, but they're less theatrical. The Pressing 1 version of The Gentleman Soldier is pure guitar and voice, while Pressing 2 has a military drum, heavily mannered vocals and some obviously flubbed guitar. The Pressing 1 version of Candyman has flute and simple guitar backing, while Pressing 2 has ragtime guitar, bumptious kazoo and extra words (including unconvincing drug references). I can only assume that the longer versions appeared on Pressing 2 by accident - but of course we'll never know if that's the case, or how / why.

When I licensed the album for reissue on Sunbeam in 2006, President Records provided the master tape. Oddly, the 'wrong' versions of both The Gentleman Soldier and Candyman were on it, meaning that we had to drop in what I assumed to be the 'correct' versions from a vinyl copy. I included the 'wrong' versions as bonus tracks on the CD, little suspecting that they had in fact also been issued at the time. The only evidence for the album's existence that President possessed was the tape - they had no photographs, extra material or original LPs, and the label's boss could cast no light on the variant versions being on the tape.

If you're interested in Mary-Anne, I've already posted about her here. If you haven't come across her, here's the loveliest version of this lovely song I've yet heard.
Posted by Richard at 03:39 No comments:

Email ThisBlogThis!Share to TwitterShare to FacebookShare to Pinterest
Labels: Mary-Anne

The current issue of Classic Rock magazine contains this warm review of Flashback #2.

A detailed interview with me all about Flashback has just been posted at the Ptolemaic Terrascope site - you can read it here.

Thanks to Mike Stax for these kind words in the new issue of Ugly Things. Issue #1 is now sold out (at source, anyway), but #2 can still be bought at flashbackmag.com and elsewhere. 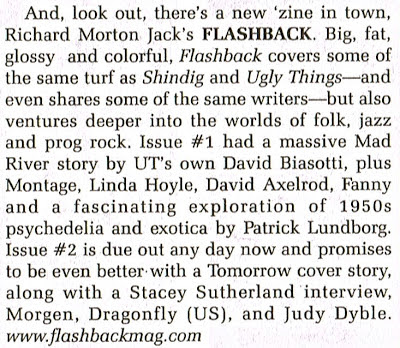