THE BEATLES: an exciting new discovery!

As many of you will know, at the end of 1970 the moribund Official Beatles Fan Club sent its members an LP entitled From Then To You, compiling the light-hearted 'Christmas message' flexidiscs they'd received from the band every Christmas between 1963 and 1969. Though it was pressed by Lyntone (who'd also made the flexis) instead of EMI, it was on the Apple label. The earlier messages tend towards sub-Goons / Stanley Unwin jollity, while the later ones have tentative studio effects and musical content. All are irritating on repeated listens, but worth a spin for serious fans. The sleeve reproduces the front covers of all seven discs, but offers no background info. A pressing size isn’t known, but as it was never commercially available, it’s extremely rare by the standards of their other official releases, changing hands for up to £1000 in perfect condition. 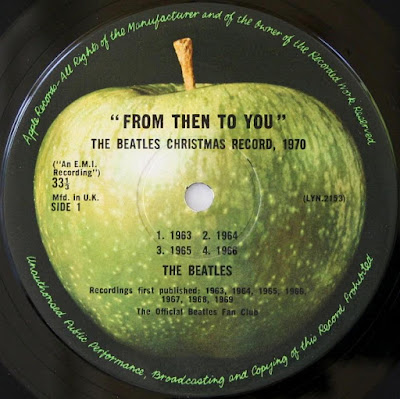 Last week an eBay seller named 933gone, based in Macclesfield, UK, listed what he called a 'MEGA RARE' copy of the album, with completely different labels to the Apple release. According to him, 'APPLE DECIDED TO CHANGE LABEL FROM LYNTONE TO APPLE. HOWEVER THE LYNTONE LP WAS PRESSED IN A VERY SHORT RUN AND IS, CONSEQUENTLY, EVEN RARER THAN THE APPLE LABEL VERSION. LYNTONE LABELED RECORD WAS GIVEN AWAY TO THE FAN CLUB STAFF, THE APPLE LABELED LPs GIVEN TO FAN CLUB MEMBERS.' 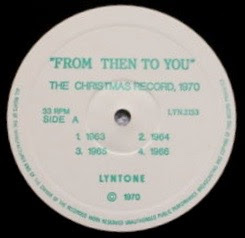 This will of course come as a startling revelation to long-term Beatles collectors. Intrigued, I emailed him to request evidence for the claim. Clearly a busy man, he disregarded that part of my message, but did have time to tell me: 'This is not a bootleg - bootleg versions have brown/beige label - this one is white label... Please look at the popsike site. There you will find the exact same record and label at £220 or 298 EUROS - its not described as a fake. I am an honest bayer - not a dealer.'

So there we have it - a fascinating artefact for serious Beatles collectors to fight over. No wonder it has already attracted a £200 bid! (PS He has also yet to reply to my contention that the American version of this that he's selling is a blatant counterfeit.)