Ivan Vaughan was the guy who introduced John Lennon and Paul McCartney at the Woolton village fête on July 6th 1957. Born on the same day as Paul, he was a childhood friend of both, and known to them as 'Ivy'. Having graduated in classics from University College, London, in 1964 he and his wife Jan set off on a hitch-hiking honeymoon around America. At the same time the Beatles were busily conquering the country, so Vaughan gave this rare interview to Datebook (the San Francisco Chronicle's Sunday arts supplement) on August 16th. It contains no startling revelations, but there are a few interesting insights. Vaughan went on to become a teacher, and in 1968 discussed the idea of opening an Apple school (as detailed in Derek Taylor's autobiography). He died after a lengthy struggle against Parkinson's disease in 1993. [With thanks to Richie Unterberger.] 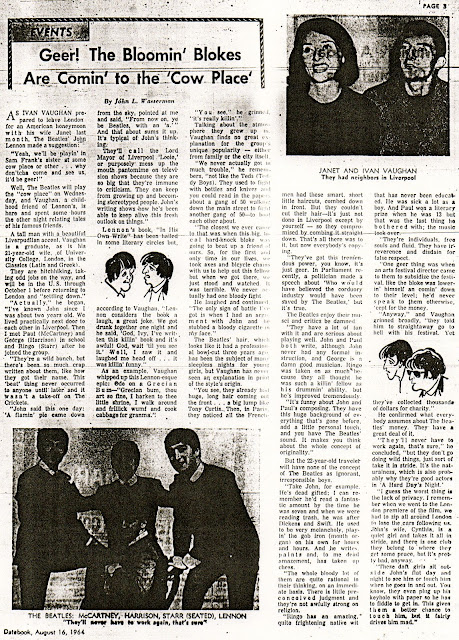 Email ThisBlogThis!Share to TwitterShare to FacebookShare to Pinterest
Labels: Ivan Vaughan, The Beatles

THE COMMON PEOPLE: 'bordering at times on the psychedelic' 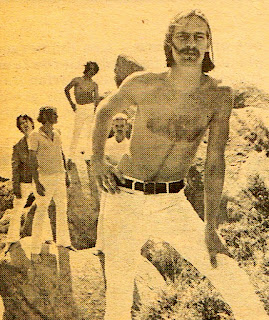 I'm delighted to post what I suspect are the only two contemporary articles ever written about the enigmatic Common People. Both come from the reliably mindblowing World Countdown, and appeared in the summer of 1969, to coincide with their fascinating album. The first seems simply to be a reproduction of Capitol's press release, while the second is a gushing interview by Dodie Smith, the paper's latter-day editor (who came from Liverpool, and appears to have vanished without trace). It's interesting to learn how explicitly Christian their world view was, having gone through a biker / garage phase before a 'spiritual type sojourn in the desert', where they 'existed on bread and water for long periods of time'. Most intriguing is the fact that they tore down their rehearsal space and put everything in it 'in an immense box which they had constructed, and buried it in the ground'. Enjoy! 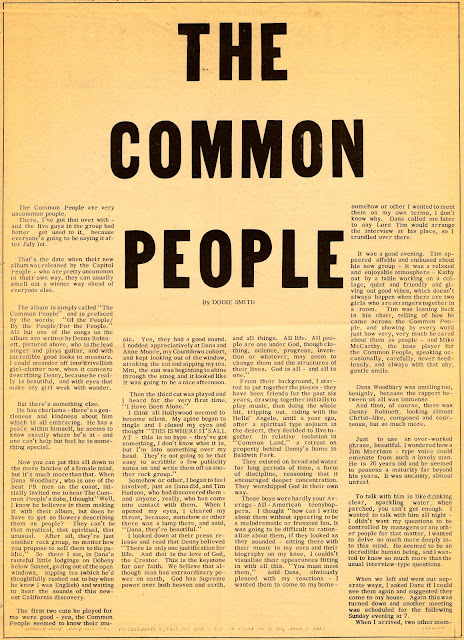 Incidentally, the portrait of Denny is credited to Nik Raceivic, who went on to make some interesting electronic albums in the 70s...
Posted by Richard at 07:01 2 comments: