In December 1967 the following black and white credit appeared on the inside back cover of the Magical Mystery Tour EP set: 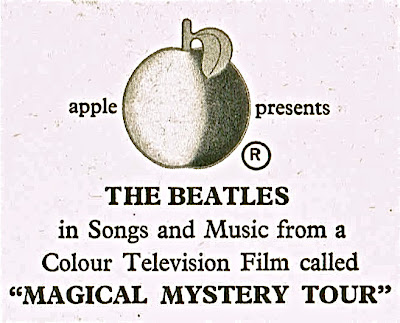 This seems to be the first-ever stab at an Apple logo, and Marijke from the Fool has confirmed that it was not designed by them. Perhaps worried that it looked more like a greengage, the Beatles (or, most likely, Paul) soon decided to scrap it.

The ad below appeared in International Times of January 5th-19th 1968, and shows a new design, which was designed by the Fool: 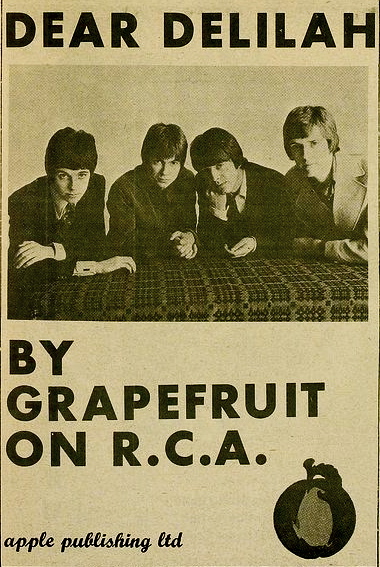 On March 23rd Disc & Music Echo announced that the image was 'the symbol of Apple, the firm run by the Beatles': 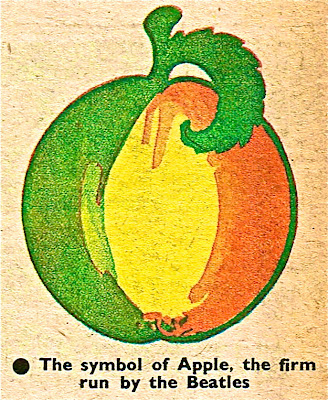 It was also used for the cloth patches sewn into many of the swingin' clothes flogged / shoplifted from / given away in in the Apple Shop (which was open for six months from December 1967). Andrew Sandoval kindly supplied this example from his collection: 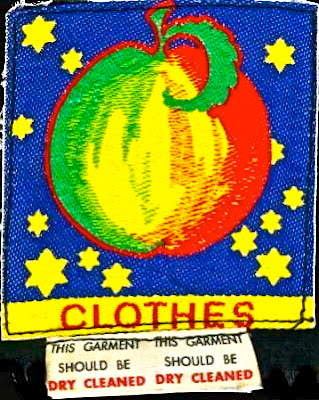 However - perhaps because the Fool's effort didn't look much like an apple either - by the time the company was publicly launched in May, a more sophisticated and enduring logo had been devised by John Kosh (under close supervision from Paul, of course).
Posted by Richard at 03:36 No comments:

Email ThisBlogThis!Share to TwitterShare to FacebookShare to Pinterest
Labels: Beatles

THE BEATLES IN INDIA: some rare pictures

The Beatles went to India in February 1968. Here are some rare pictures of them there (with original captions), taken from Disc & Music Echo of April 6th and April 13th 1968. I'm not sure if they've been reprinted since, but I've certainly never seen them elsewhere. No photographer is credited, incidentally. I know that gluttony is a deadly sin, but it's frustrating to think that there must have been many more taken at the same time...

Email ThisBlogThis!Share to TwitterShare to FacebookShare to Pinterest
Labels: Beatles

THE ESCORTS: with a little help from Paul McCartney 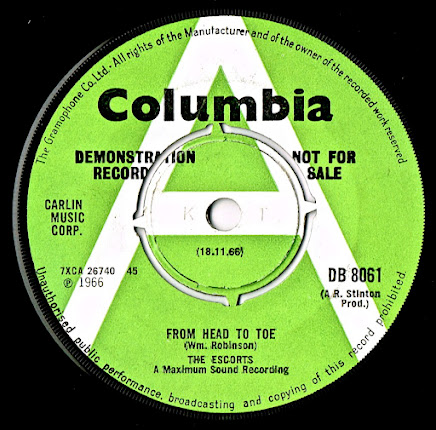 I wrote last week that Paul McCartney's contribution to The Family Way soundtrack was 'the first solo musical project by a Beatle'. However, at much the same time he oversaw this little-known 45. The connection was with his old Liverpool friend Paddy Chambers, who'd been a member of The Big Three and Paddy, Klaus & Gibson (with Klaus Voorman). Brian Epstein managed (or mismanaged) the latter, prompting Chambers to join pop-soul combo The Escorts. From Head To Toe is a Miracles cover, uninteresting but for the fact that - as is made clear in the article below (Record Mirror, November 19th 1966) - Paul had his hands all over it, despite not receiving a credit. 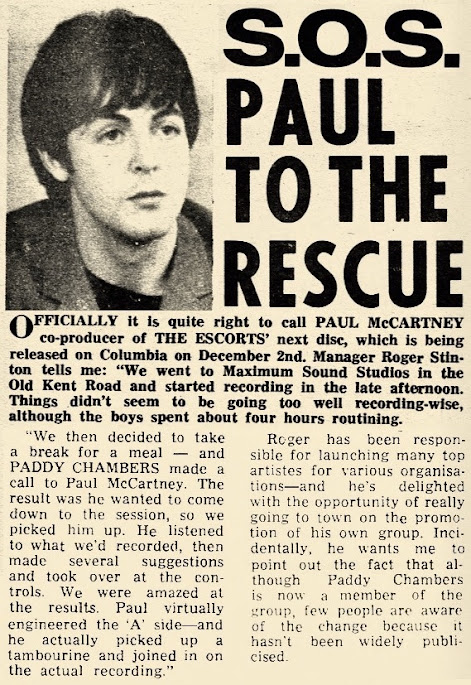 Jimi Hendrix arrived in the UK with Chas Chandler at 9:00 am on Saturday, September 24th 1966. He spent the ensuing month dazzling the former Animal's musical contemporaries, as well as joining forces with Noel Redding and Mitch Mitchell and supporting Johnny Halliday in Paris. He recorded his debut single, Hey Joe, on October 23rd, and on October 29th the great UK music paper Record Mirror published the first ever article about him. Written by Richard Green, it has a dubious tone (Chandler: "he's coloured but he doesn't think like a coloured person"), calls him 'Jim Henrix' and slashes three years off his age - but it also makes it clear how much of a stir he was causing. 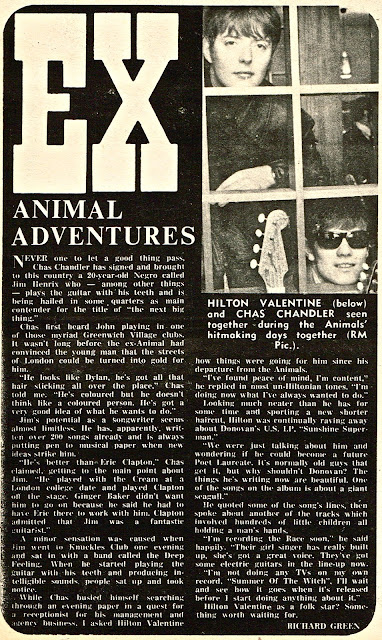 As well as continuing to wow London's hipsters, in November Hendrix signed to Track, played some shows in Germany, hung out with the Stones as they recorded Ruby Tuesday at Olympic (and with the Who as they recorded at IBC), and began taping what would become Are You Experienced. On November 25th he spoke to Peter Jones, also of Record Mirror, and the resulting interview - his first - appeared on December 10th. By this time it was obvious that he was destined for major stardom, as the headline made clear: 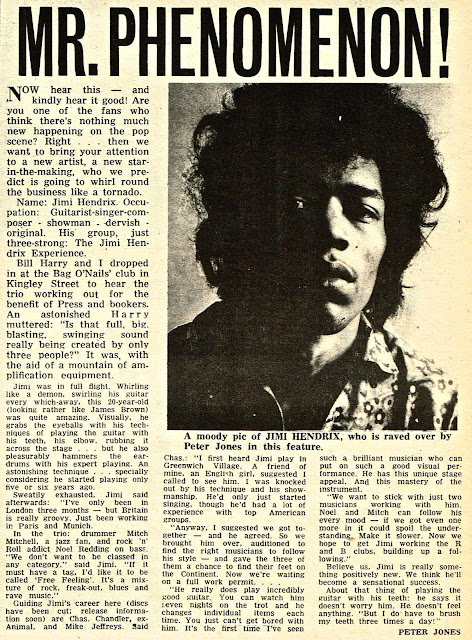 Hey Joe / Stone Free was released a week later, on December 16th. It got rave reviews in the Christmas editions of the music papers and climbed to #6 in the British charts. As Chandler had predicted to Jones, Hendrix did indeed end the year 'a sensational success'.
Posted by Richard at 08:33 No comments: 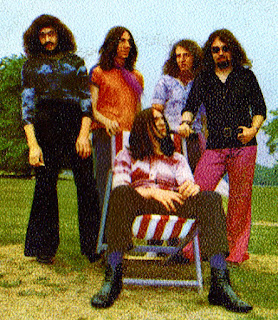 In the course of assembling Galactic Ramble and Flashback, I've trawled a huge number of British music mags and papers. Very few bands seem to have received no press whatsoever, but the impressive Raw Material are one. Indeed (as far as I'm aware), they're one of the few remaining bands of the late 60s / early 70s who have yet to resurface and tell their tale.

Attached below is the only info about them I've ever encountered. I'll also post the only ads that I've found, to promote their October 1970 debut LP (and extracted 45) and their November 1971 Time Is LP. These snippets offer the bare bones of their history, but there is of course much left to be discovered. As ever, if you know more, please get in touch...


Having signed to the tiny Evolution label, their debut 45, Time & Illusion / Bobo's Party appeared in the autumn of 1969. Their second effort, Hi There Hallelujah / Days Of The Fighting Cock appeared in the spring of 1970. Here's a press ad for it: 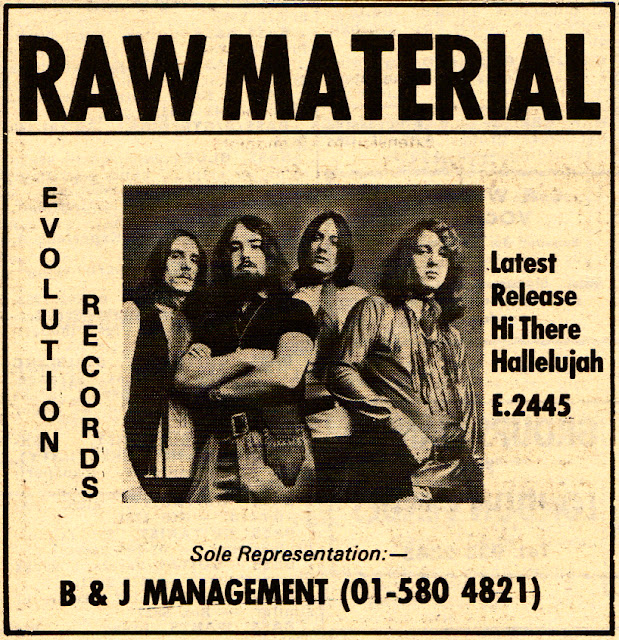 In May Evolution sent out this press release and bio to promote their third 45, Traveller Man Parts 1 & 2: 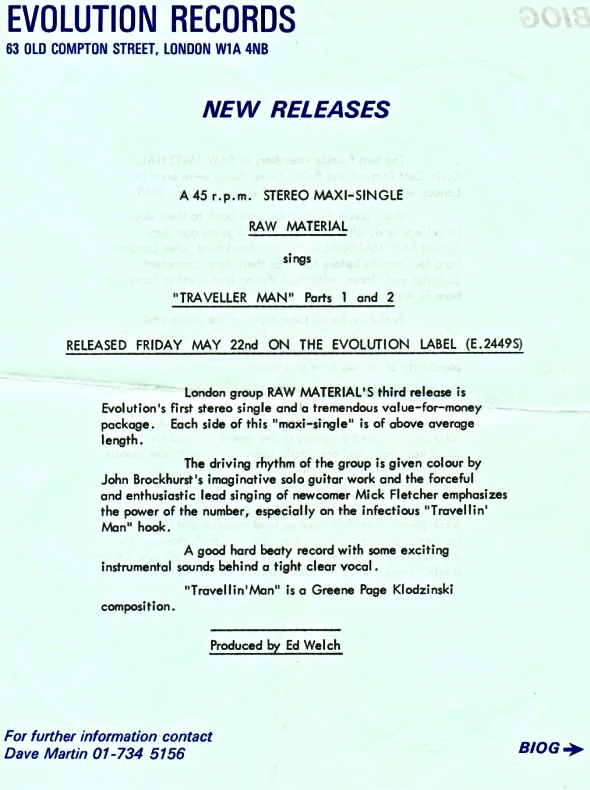 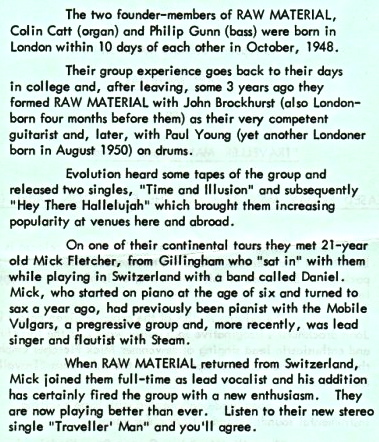 Here's the scarce German picture sleeve for that release: 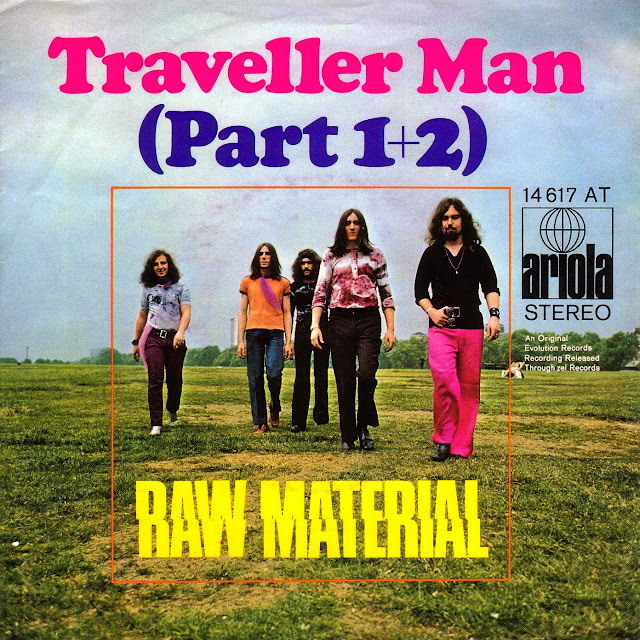 Their debut album appeared in the UK in December 1970. Here's an ad for it: 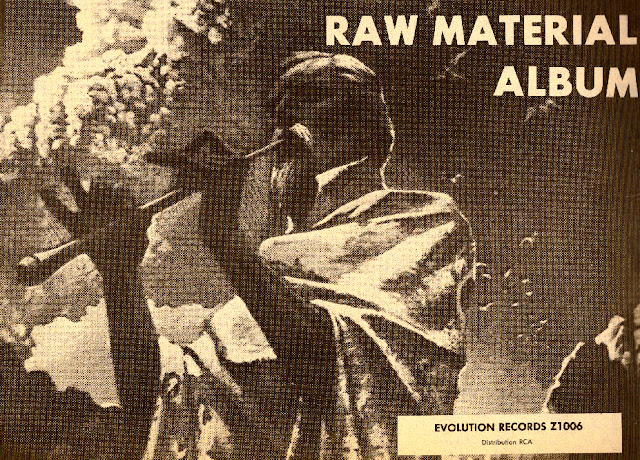 A few months later they cropped up in a Marshall advertising supplement in Sounds, dated May 1st 1971: 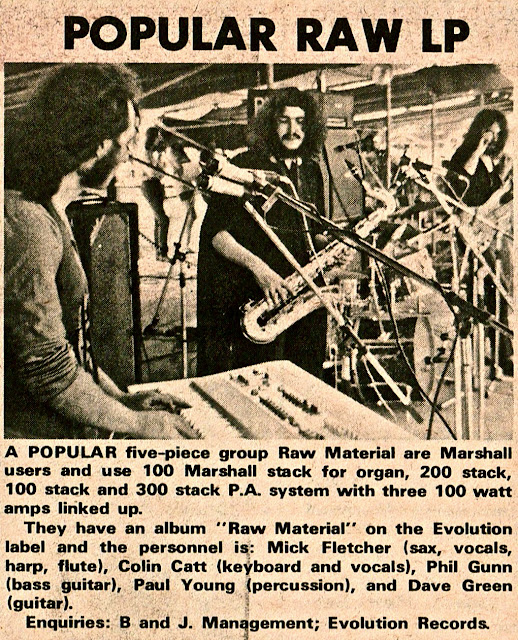 Their second and final album appeared in November 1971: 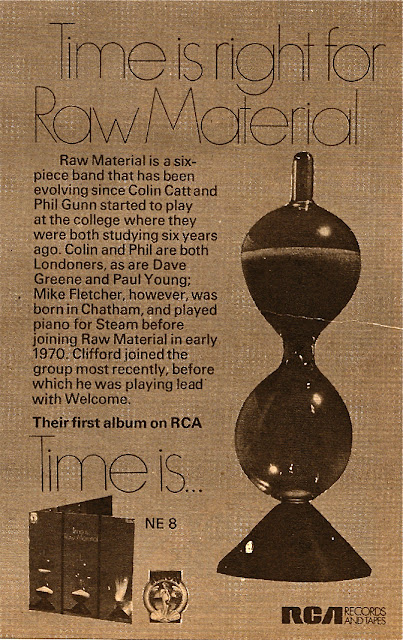 This article appeared in Sounds of May 27th 1972, and is clearly an incomplete reprint of a press release. I suspect they'd split by then. 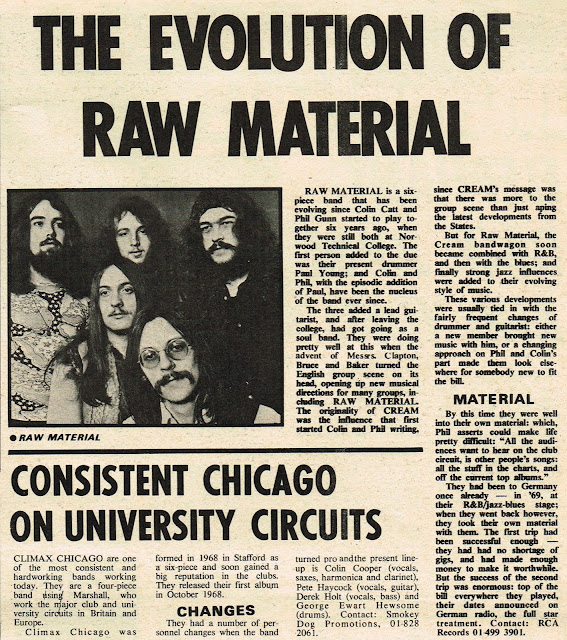 If anyone knows more, please get in touch!
Posted by Richard at 05:28 9 comments: 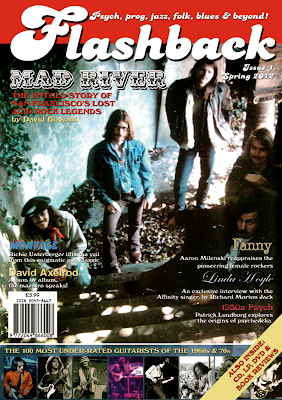 The first issue of Flashback is available as of this week, and can be seen and bought by clicking here. 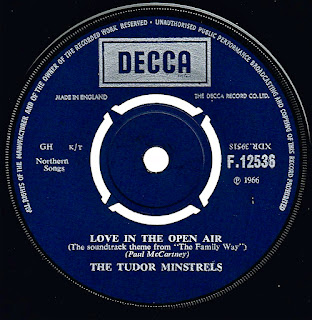 In the autumn of 1966 the Beatles had just finished touring, Revolver was in the shops, and the boys were having a break. George was getting to grips with the sitar in India, John was filming How I Won The War in Spain, Ringo was knocking around (and visiting John on set), and Paul was setting up house in St. John's Wood, as well as immersing himself in London's underground. He'd also let NEMS know that he would like to write some film music, so when the opportunity arose to compose for the comedy drama The Family Way, he brewed up a couple of tunes - the strident Theme From The Family Way and the pretty Love In The Open Air (click here to hear it). They were duly arranged by George Martin and recorded by studio musicians in time for a soundtrack album to appear on Decca in December. Having assured Martin that they had no intention of extracting a 45, Decca cheekily did just that, crediting it to The Tudor Minstrels (a nod to the Boulting Brothers' company, Tudor Films). By this time Martin had recorded different versions of both tracks to be released on United Artists, so the singles ended up competing with each other. Hey-ho, both flopped, as did the LP.

The Tudor Minstrels disc certainly makes for pleasant listening, and can be called the first solo musical project by a Beatle (albeit not actually featuring one). It carries sole writing credits for Paul, even though John helped with Love In The Open Air. Incidentally, the 45 that UA released in October 1967 to tie in with How I Won The War doesn't feature any Lennon involvement, despite being credited to his character in the film.

Here's the full story behind Paul's work on The Family Way: 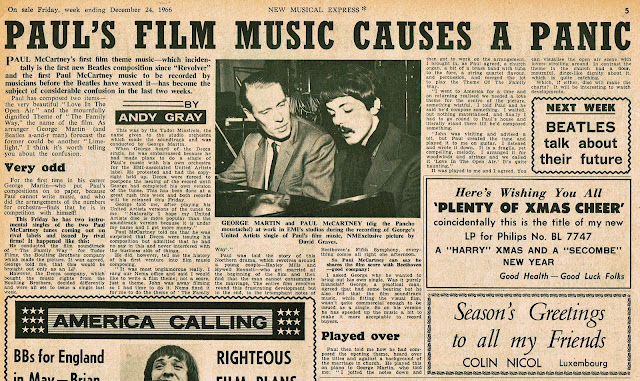 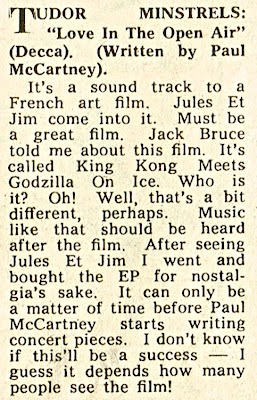 The following comment was left earlier today by someone called John Faulkner, regarding my recent post about Simon Finn. Unfortunately Google put it straight into the 'spam' file, so I'll post it here.

'Perhaps if you were even one third as successful as Graham Cross, then you would save your "cheesy" comments for the lavatory wall - which is where they belong. We all "cut corners" hahaha. To use an overworked saying, get a life, and let those who know better than you get on with theirs. By the way your blog sucks.'
Posted by Richard at 10:42 3 comments: