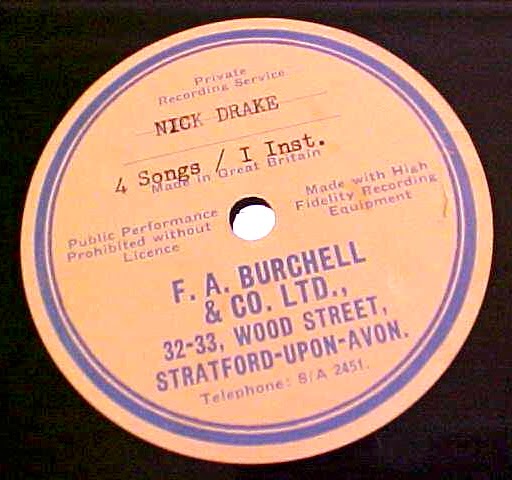 Very little Nick Drake memorabilia has ever surfaced - no signed LPs, no promo photos, no shop posters and no acetates. However, this month an eBay seller named Phil Jones - username pctc01 - listed what he described as 'a remarkable find': the first Drake acetate ever known to exist, let alone reach the market. By way of provenance, he stated that 'the disc was purchased along with a large collection of mid 1960's to 1973 Folk , Rock , Blues LP collection [sic]'.

While the details he offered were sketchy, he did reveal that it consisted of five tracks: Way To Blue, Three Hours, two that 'I do not recognize' and a brief instrumental that he described as 'a short 3/4 time signature [sic] with the sixth string dropped to D'. He went on to suggest that 'an approximate date for this disc is around 1968 / 1969. By the sound of the disc the tracks are early, but near complete... very clear one mic recording.'


Clearly used to time-wasters, he concluded his description by stating 'I would prefer to sell to a genuine collector, so any of the usual 'have you got a buy it now' emails from 'dealers' will be ignored. But genuine collectors are very welcome to email questions.' Regarding myself as such, I promptly sent him the following message: 'Hello, what a lovely looking item! I am a serious collector and have a couple of questions:  1) is it 100% definitely a 60s artefact and not a clever fake?  2) can you give any clues as to what the two non-5LL songs might be called? Many thanks.' Answer came there none - and no one I know received an answer to similar enquiries. I emailed Nick's delightful sister Gabrielle to see if she remembered the disc. She didn't, and added: 'I cannot quite think of the circumstance that would lead Nick to go into a local Stratford on Avon recording studio, when he was quite proficient and used to recording himself on cassette.'

In the absence of detailed information, decent-quality images or soundclips from the seller, I did not bid. It ended up fetching £3211. Perhaps the lucky high bidder will share the music on it in due course. Certainly Nick's estate are extremely interested in it, and in any similar acetates that might turn up from the same source.
Posted by Richard at 05:29 5 comments: