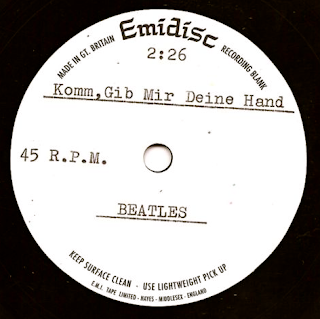 As most people reading this will know, acetates are fragile lacquer discs that unfinished or as-yet unreleased music used to get pressed on. They were of temporary use for purposes such as reference amongst musicians and producers, quality testing for engineers, advance radio play, or publishers' demos. The point is, very few (if any) were made  for any given recording, and those that survive tend to have done so by accident. At this remove from the 1960s, collectors will pay huge sums for acetates that contain unreleased music or different mixes to familiar songs, and if the band in question is well-known, the price gets higher and higher. No artist is more collectable than the Beatles, so Beatles acetates are perhaps the most desirable of all. This is where it gets complicated. Unlike official releases, there is no way of telling how many acetates exist of a certain recording, and they're pretty easy to fake, seeing as they tended to have simple labels with hand-written or typed info, and plain sleeves. At any time on eBay these days there is a rash of potentially counterfeit Beatles acetates on sale. The main purveyor of them at the moment is based in Jordan, Minnesota. Check out his recent feedback by clicking here. That's $20,000 worth in the last month alone. Not bad, eh?

I emailed him to ask whether his astounding acetates (which span the whole of the Beatles' career) were the genuine article, and his response was as follows: "I cannot guarantee 100% that they are 1960s issues. If you have any doubts, please do not bid on them." Yet he allows no such doubt to cloud his listings - while offering no provenance for them, he simply claims they are 'RARE' and 'vintage' and on 'EMIDisc Records' (there was no such label, this was simply the brand name for EMI's blank acetate discs, which were also available for domestic use). I asked one of the world's leading rock memorabilia experts for his take on this extraordinary haul. He replied as follows: "I don't think John Lennon left these behind in Minnesota, but someone did leave a cutting lathe there, and the result is that a lot of unsophisticated people on eBay are buying worthless fakes. Unfortunately, people's desire for an unbelievable deal trumps common sense. I find that if the deal looks too good to be true, it almost always is - especially if the torrent of stuff never stops. If I thought any of it was remotely authentic, I'd be bidding on all of it, as would all the major dealers. Ridiculous stuff." 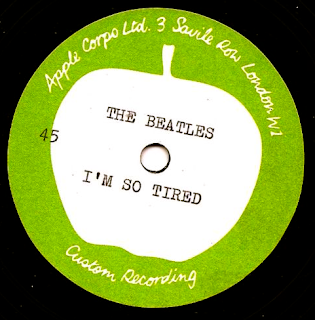 I also asked another expert - one of the best-known collectors in the US - for his take, and this is what he wrote back. "I can't recall anyone in the history of eBay offering so many Beatles acetates. To me the labels look wrong, and of course the discs aren't hard to make (after all, they made mono record cutting machines for home use in the 1940s, 50s and 60s, so there are still a lot out there). Assuming for a moment that they're all real, though, it's gotta be a damn short list of people that would have been in possession of all these, right? Like George Martin - but then, he was a tape man. So maybe someone like John Peel. But would he have had the early ones as well as the later ones? Whoever it was, if they had that many Beatles acetates, you'd wonder why they're selling them to an eBay dealer now, and you'd think they would also have some by associated acts like Gerry & The Pacemakers and Cilla Black, who are of course a lot less interesting to collectors."

I'm not going to accuse this seller of cheating his customers, but I am going to say that if these are real, the story behind them is guaranteed to be one of THE greatest record-collecting tales of all time, maybe the greatest... Perhaps he can post a comment here and tell it? In the meantime, this eBay thread makes for intriguing reading: